Where the Heart is 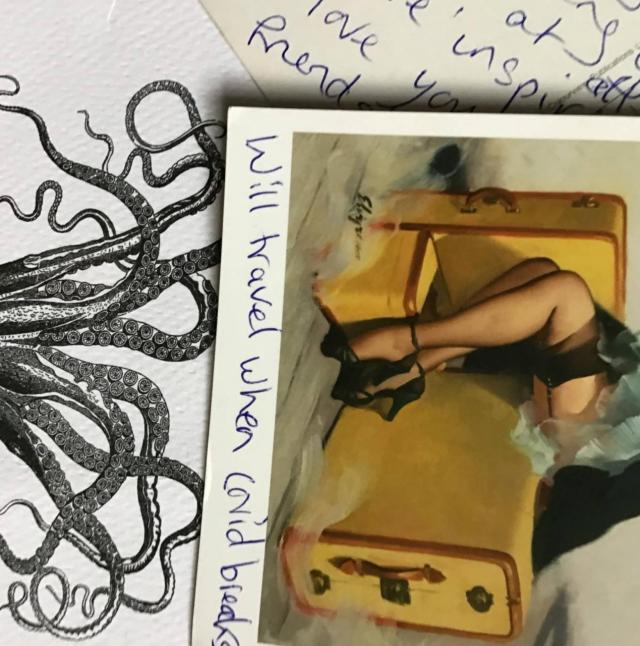 In the early 1970s I was seven years old when my family immigrated to New Zealand from England, we were ‘£10 Poms’1. Travelling via assisted passage was part of a scheme that brought white British workers to Australia and New Zealand in the years after the Second World War. Prior to this my world had been a tight knit extended family, Mum and her two sisters, families with children of a similar age to me lived on the same street a few doors down. The rest of our extended family was not much further away. On Sundays our whole family would gather at my great-grandmother’s house to eat and laugh, singing songs around the piano.

In those days there was no internet, long distance telephone calls were expensive, phone calls to ‘back home’ were an occasional luxury. Being given a minute to say hello, speaking quickly in the midst of equally rushed adult conversations, each second ticking away as a sum on a mounting phone bill. Since post was expensive, my mum would write Aerograms: specially designed light weight single sheet letters which folded in on themselves to form both letter and envelope.

Distance meant longing and a depression I could neither articulate nor understand as a child. I thought constantly of a return to ‘home,’ which over the years became an abstract concept. In the small family unit I was part of things never went smoothly, I had a talent for not fitting in. Growing up queer, neurodivergent, rebellious, experiencing years of addiction; I found myself moving further and further away from my family. First to a remote part of the same country, then to Australia and finally returning to England.

If I’d imagined I could return to the extended family I had left as a child, in reality, the distance of thirty years proved a difficult span to cross.

Despite my distance from my birth-family, I found intimacy and family of a sort with SM Dykes and 12-step recovery people. It is a kind of family formed by bonds of affection and support, not blood or lineage. With queer partners or ex-partners, friends, lovers of lovers, I made relationships that have morphed over the years, having a plasticity and endurance where our roles are allowed to change. In 12-step recovery, intimacy can occur with people I’ve known for 30 years or those I’ve met recently, a camaraderie forms by listening, bearing witness to each other’s inner lives and struggles several times a week. Both cultures of intimate connection hold the knowledge and acceptance that we live in times of distance. Finding ways to maintain constellations of care that are not always dependent on particular individuals. An intimacy that can survive despite and at times because of its fragmented nature.

Many of my ‘close’ people are physically far away in a loose network that forms part of a wider SM Dyke scene that has met annually in Berlin for more than 20 years. A kinky queer community of folk who, in their best fetish wear of rubber, leather and lace, gather to attend parties in the dungeons of the city, often meeting new friends and loves. Long-distance is often a feature of our relationships rather than outside the norm.

With some of my connections in this enforced distance of the pandemic, our relationships have deepened through efforts we have made to demonstrate care. Daily updates or longer online ‘dates,’ ‘good mornings’ and ‘good nights,’ checking in about how I am, letting me know who is pissing them off, what they are excited about, sending selfies and pictures of their pets. We read out loud to each other, sharing stories of queer becoming, trans-discovery, kink journeys, science fiction imaginings of divergent ways of being. Taking time to write paper mail. Sending care packages, gifts of bath sachets, make-up, chocolate, sweets, socks, stockings, hair clips, seeds for the garden, crumpets and cookies.

With some I meet online and share 12-step recovery meetings, special interest groups for those of us who are queer, trans, or sex workers. In a virtual space we join ‘anonymously,’ speaking the things that we feel safest speaking to a room of relative strangers.

Fifteen people from my scattered SM Dyke community join me in an online dress-up date, story time in a virtual blanket fort. I spend hours preparing, dressing up as a creepy drag-thing clown and building a blanket fort lit with fairy lights in my room. As people join my zoom-room, I see that others have made efforts to decorate and dress up in cute pyjama outfits with their cuddly toy companions ready for a playful version of story-time for adults, contacting their inner kid space in softly lit rooms. As I read from Derek Jarman’s ‘Garden Diaries,’ Dorothy Allison’s ‘Skin,’ New Zealand Poet Jonathan Fisher’s ‘Six part lust story’ about cruising in bars, we are connected across the digital ether by our queer history.

After long years of illness, a poly family member is dying. We’ve seen each other in person only occasionally but spaced across 15 years these moments of connection shared sorrows and joys; the bond is real. One of her long-term partners, one of my close people, sends me updates as the process of death begins. The distance of miles, cities, countries feel like tender minutes, in which I hope to support, but in which I also feel included and close. I feel grateful to hear and feel how well-cared for this special person is during her ending journey.

During the pandemic I found stable housing after many years of crappy low rent accommodation. After moving in I receive a parcel in the mail, it contains a package of bread flour, a sachet of yeast, a small jar of salt, and a copper coin. Alongside there is a letter translating the instructions on the packet of bread mix into English and describing the German tradition of placing bread, salt, and coin at the door of a new home, symbols of plenty and a flavourful life. A sweet gesture that brings a smile to my face. Having permanent housing for the first time in my life, I prepare the bread mix in my new kitchen and wait as the smell of baking bread fills the house. Once baked and cool, I cut the loaf pressing the coin into it and set this and the salt near my front door. Finally, I’m home.

1. '£10 POMs' refers to the nickname given to people who were part of this immigration scheme: £10 as this was the nominal fee charged for passage, and 'Pom' or 'Pommy' being a slang word possibly derogatory used in Australian and New Zealand to denote a person originally from England. The term has many possible origins including being a rhyming slang for 'immigrant' in Australia. Which may or may not be the true source. More https://en.wikipedia.org/wiki/Ten_Pound_Poms

Jet Moonis a multi-disciplinary artist who writes, performs, and collaborates on fierce work for radical social change. Collaborating for many years with the LGBTIQ, kink, sex worker, disability, and survivor communities they belong to, creating intimate spaces of sharing, visibility, and resistance. They live in London, England.