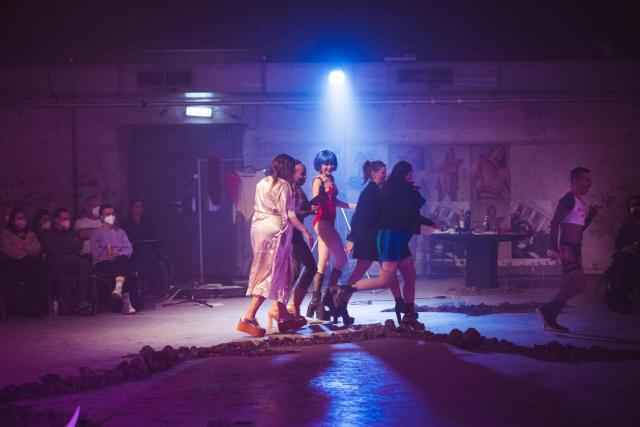 For this Migrazine edition, we found it fitting to reach out to Red Edition, a local organization of migrant sex workers living in Vienna. We believe sex work is a business where intimacy is implied yet not necessarily in a sense of something that is looked for. We contacted Aaron*, an activist, artist and sex worker non-binary person from Germany who has been a member of Red Edition since 2019, to tell us more about the experience of sex workers in this context. Red Edition is open for current or former sex workers to become members but they also collaborate with allies who want to be politically active and support sex workers‘ rights.

Migrazine: Could you describe the work of Red Edition and its main goal as a collective?

Migrazine: Could you tell us about the legal situation of migrant sex workers that are currently in Austria? And also, how has their situation changed since the pandemic started?

Aaron*: Sex workers in Austria have many obligations (registration, tax liability, every six weeks mandatory health check-ups including vaginal swaps, SVS health and accident insurance, work only at approved workplaces), but disproportionately few rights (apart from the few benefits provided by the SVS).The list of disadvantages for sex workers in Austria is long: There are still no labor rights, total ban of sexwork during Corona, great dependence on most operators, despite being self-employed, obligation to pay taxes but there are no employee protection regulations.

At the same time sexwork is the sector where migrants can earn the most money compared to other jobs, in the vast majority of cases. Depending on the sector of the sex industry, the job also offers flexibility, there is no contractual obligation, training is usually not necessary, there is the possibility to socialize, practice a foreign language, etc. When we say migrants, we mean female* labor migration. This refers to the massive presence of women in search of work opportunities outside their country of origin. It doesn't matter from where to where they migrate and it doesn't matter if they work as cleaners, at the cash register, as domestic or care workers, factory workers, in gastronomy or in the sex industry. We are talking about a feminization of poverty: migration for subsistence.

Sex work is often a consequence of the migration process: few other job opportunities due to lack of education or the fact that the respective education is not recognized, lack of residence status and therefore lack of work permit, etc. The role and number of migrants in the precarious sector is increasing rapidly. Existing employment relationships are predominantly in the "sex-care-nursing work" sector. Precarious service sectors such as the sex industry, the care or cleaning sectors, in which migrants are particularly strongly represented, must therefore not be viewed in isolation. Exclusion from the system of labor rights and equal treatment and thus from their protection is common to all of them and only got worse during the pandemic. One good example for the discrimination of migrants is that the WKO (Wirtschaftskamemer Österreich- Austrian Economic Chamber) funding for self-employed people was not paid out to foreign bank accounts for almost one year… Another example is that a sex worker without a secure residence status cannot file a complaint with the police if she experiences violence. As a result, she experiences a different form of marginalization than her colleague with a secure residence status or an Austrian passport.

From our perspective, exploitation and violence are not inherent to sex work per se, but are fostered by structural, legal, and governmental frameworks. The lack of rights for migrants and (migrant) sex workers, however, promotes exploitation, dependencies and violence. What is needed, therefore, is a de-criminalization, de-tabooing and de-stigmatization on the legal and societal level as well as on the discursive level.

Migrazine: The use of OnlyFans has become more visible in the last few years... Especially since the Covid-19 pandemic started it became an option for people that were unemployed to make money . Not only people who were already working as sex workers, but also artists, celebrities began using this platform. What are your thoughts on the advantages, and disadvantages of the use of such a platform? And what do you advocate for regarding the independence of sex workers?

Aaron*: I myself don't use OnlyFans because I already spend too much time on my phone and I know from other sex workers that it is very time consuming to get your OnlyFans (OF) running and you have to make a lot of effort. But of course lots of sex workers decided to switch to online services to at least make some money during the pandemic, as did other people who weren't able to work in their job anymore.

The good thing about OF is that it mostly allows the content creators to decide for themselves what kind of content they want to show or sell. So you are independent. In comparison to other providers, for example cam sites that take up to 70% off your earnings, OF takes 20% of your income. So this is of course a pro. Other similar sites came up in the past years that take even less, but at the moment they are not as popular as OF. That’s why a lot of sex workers decided to keep their profile at OF even after the recent events where OF said they will remove all adult content due to restrictions with Mastercard payment processing. This led to a big online call-out and OF retreated, stating they won't proceed with this for now. There are lots of things to point out regarding the question if the platform really aims to support sex workers. For example, their decision to limit the amount of tips and price per post, and the fact that you can only receive a payout every 30 days, after actress Bella Thorne used the platform and earned one million dollars in a day, which is super fucked up…

A dream would be a platform that is run by sex workers themselves, providing a market space for other sex workers to sell their content uncensored and to fair conditions.

Migrazine: We saw you have been participating in several art performances and festivals, what do you look forward to with this artistic aspect of your work and how has the experience been so far?

Aaron*: The experience so far ranges from art activist projects that have been self organized, at parades or demonstrations for example but also some bigger collaborations. In 2019 we did a performative intervention at Mariahilfer Straße in the frame of Wienwoche Festival, which was really nice and created a lot of visibility. During Corona it was a bit harder for us to organize but this year we created our biggest event so far. Red Rules Vienna was a collaboration between sex workers, sexwork activists, allies, and artists from Vienna to create not only an international, threeday sex worker conference with lots of diverse inputs and workshops but also to create a performance that was shown on four evenings. Every evening was sold out so it was a huge success for us to reach so many people and make them aware of the topics that sex workers have to deal with on regular basis. Performance is a great medium to entertain on the one hand, but at the same time educate or open the horizon for socially critical thinking.

It was, in total, an amazing experience. Through art activism it is possible for us to connect with more people who maybe wouldn’t be interested in supporting sex workers‘ rights just because they are not familiar with the topic. So you could say that it is an important outreach tool for us and of course it is also fun. As lots of us also have experience as artists in one or another way, it is good to bring in our expertise. Practicing art in different ways in order to spread our political message is always our goal, this is the way we break the taboos for and around sex workers and bring awareness to society and create visibility for our needs and issues. These types of events are also empowering for the sex work community itself, which is crucial for the sustainability of our movement!

Interview via email by Lia Kastiyo-Spinósa.