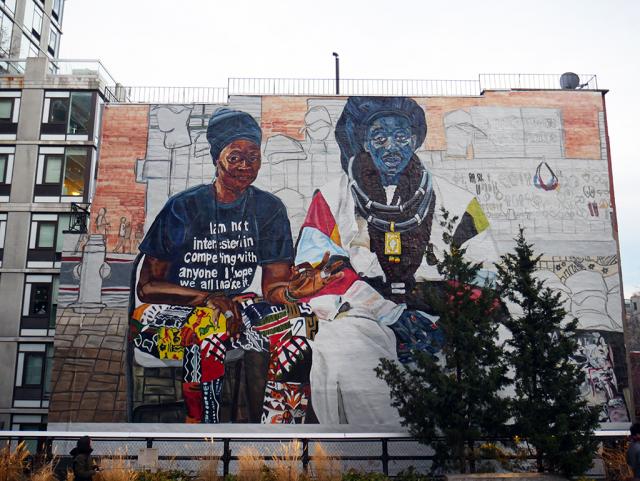 Travels have been part of my life as a way to gain new understandings of the world. Traveling has made me more aware of my privileges and my lack of them. Especially during the last years of wandering, traveling has helped me to recognize more clearly the values of each country as well as the inequalities of the world. Above all, traveling has transformed the way I position myself.

On this occasion, my last trip out of Europe took me to visit the settler-colonial land of the United States for the first time. During the Christmas and New Year holiday break, I found myself visiting the east coast of this country. I happened to be in New York City to conclude a decade and to sum up the many feelings I had transited during 2019 regarding humanity, capitalism, resistance, life. In the following lines, I look forward to sharing a bit of the feelings I sensed through that very particular trip.

How did I get to travel there? I have to say that since my arrival to Europe, I have been consuming North American society and culture more than ever, not only by speaking in English on a daily basis but also through the theory and the type of activism that inspires the people born here. In general, it has been revealing for me to acknowledge how the Black European diaspora is mostly inspired by the North American black theory and activism. Honestly, it has been disappointing to realize how the realities and experiences of non-northern Black struggles and resistances are barely known and don’t generate so much interest here. This has given me a clear sense of the actual existence of the American imperialism even within Black studies and among Black folks searching for a change.

Coming back to the trip, this recent proximity to the US, added to the fact that, as with many the Dominicans, part of my family lives there, I started to get more curious than ever about that place. That was a huge change for me, for me the activist who only two years ago radically stated “I will never have any interest in putting a foot on that land.” So, the decision implied dealing with a lot of contradictions and doubts, but somehow the curiosity of checking that reality out was stronger.

From the very first day, arriving in New York City was already a great change, beginning with the two hours distance there was between the airport to the home of my family in The Bronx. The train itself was a very different, excitingly comfortable scenery: I looked like its people. Some days went by, and I started to slowly observe how everything worked in this city, the prices of things, the interactions among people, and the living conditions, especially of my family and my friends, who I could barely see due to their long work schedules.

Not much later, my mind started to struggle trying to understand where on Earth I had just arrived and which type of dystopia this place was. It was by the end of the very first week that I started to realize I was slowly going through an emotional depression. Even though it was a journey for re-encountering family, friends, and loved ones, the general air of life in NYC had me depressed. The environment shocked me to the point that I was seeing everything with bitterness and feeling everything was wrong. The museums I expected to enjoy were boring, the scenery I wanted to see was blurry, nothing was enough to fill me.

I spent around ten days in some sort of crisis, in which I felt immensely sad after seeing the contrast between the image and the place, between what it is said and what it is actually happening. Even though a part of me knew this city already (let's stop for a second to realize NYC might be the most recorded place in the world), another side of me was having a permanent disappointment with what I was seeing. I couldn’t clearly find an answer to why it was happening to me, but seeing that environment with my eyes felt completely different from what I could have ever imagined. Not because I didn't know where I was going, not because I didn't know anything about the US's inequality, but because it was painful to see and feel that in my body, especially in the land that is in the entire world´s mouth and minds as the standard model of life.

The shock was definitely not about the “poverty”, the dirtiness or the violence in the city. I come from those backgrounds and actually those landscapes make me feel like I am living in the real world, very different from the “wellness” bubble of central European cities. However, while transiting this city during the days, it was shocking to clearly see how people were holding with each other the life of an economic capitalist life at its most. I saw diverse groups of people working in service for other people that work in service. I saw in front of me the material objectification of that scam calling for a supposedly “better life.” I saw witnessing the demons of modernity and capitalism. I was too awake and seeing beyond the picture was so scary.

The whole sense of sadness was also particular because I was feeling it not for a particular thing in my life but for people’s lives, for humanity, for the world. “If this is a better life, what is next?” I started to conclude. “This is over.” I repeated to myself “Humanity is over.” Depression at it best. We know it, and we have been there at least once. Concretely, I kept searching for an answer: “Why-do-people-love-this-city-so- much?“ Meanwhile, I was pissed at a world still thinking that the US-American lifestyle was better than others. I was pissed to know that NYC has been declared the greatest model of a modern city. I was pissed to see how many Caribbeans had flown over there for a life that was not much easier than the one they had left back home.

I can specifically remember when I was on a ride on line 2 around 5 a.m. on December 23th. I was traveling with a friend from The Bronx to Downtown to take a bus to Washington D.C. We were very sleepy, and we were very lucky that we had found seats to sit, since not much further down, the train started to get completely crowded. It was around 6 a.m. when I slightly opened my eyes to check where we were, and the thoughts came around again “We are the only ones traveling away on this wagon. Ain't nobody here carrying a bag, ain't nobody here leaving for the holidays. The furthest most of the people can afford to go on X-Mas is to visit their relatives on the other side of the Bronx. This is a damn city of labor!”. This place, the epitome of capitalism and labor exploitation. How could I forget that when traveling? How could I enjoy the holidays while others couldn’t? Of course, guilt was not taking me anywhere, but we know how our mind works in moments of blues: Asking triggering questions without an answer, without a clear solution nor a clear future.

Slowly, time and feelings went by, and after some weeks going back and forth to “the city,” one Sunday, I managed to go to one of the Baptist churches in Harlem. As part of the New York City tourist attractions that romanticize the way African-Americans fight for their own daily survival, I got inside one of the churches, looking forward to catching some Gospel music. Unfortunately, it was already too late, and I missed the spectacle, but there were still plans for me and I got there just in time to hear one the pastors preach. With it came a very spiritual, emotive moment of light and understanding I will always be grateful for.

Coming from a mostly catholic family, despising putting dresses on and straightening my hair before church, religion had always been removed from an understanding I wanted to see. However, this time was a whole new experience, because I acknowledged a very different way of communal relation between people, where the mass is a space for releasing feelings and emotions in a more effusive way than those I attended as a child. I will always remember this experience as a moment when I regained the strength I had lost while suffering from huge disbelief in this world. From that point on, I understood more than ever how fundamental religion has been for the forgotten of the world in order to stand up day by day. I understood how powerful the speech of a pastor can be for people, and how they have represented for years the place of a therapist, a motivator, and a coach for life.

Now the time has passed, and most of the feelings of sorrow are gone. Some time after the trip, I started to realize those feelings were not just about New York City. With more clarity, I could come up with the resolution that I had wrongly believed in the idea of a better western life, and what had actually failed to me as a concept was thinking of the city as a better place to be.

Once back home, it was very hard to repeatedly answer the question about how my journey was without dispersing sadness. In time, I started to concretely define that what still makes New York City an interesting city is its diversity of people and their creativity in regards to their survival, through art, music, humor, and community. In other words, the capacity of people for regeneration and resilience in one of the many places where the exclusivity of the “good” standards of western life is not easily reachable.

Today I can say that even though the feeling of “this humanity is not going well” is still there, the positive feeling of aiming for creative survival in a world heading to its end is again on the top of my priorities... After all, what will our strategies be for resisting depression in big modern cities?

Lia Kastiyo-Spinósais a Caribbean migrant editor, and artist. Raised in South America and living in Vienna since 2018, Lia survives life in Europe through dance, migrant community love, and plants. Each piece of Lia's interdisciplinary work has a socio-political connexion. Every new project is used as a way to express her personal critique of the world and invite the audience for an active engagement.