“Art from after Crimea became my way to survive” 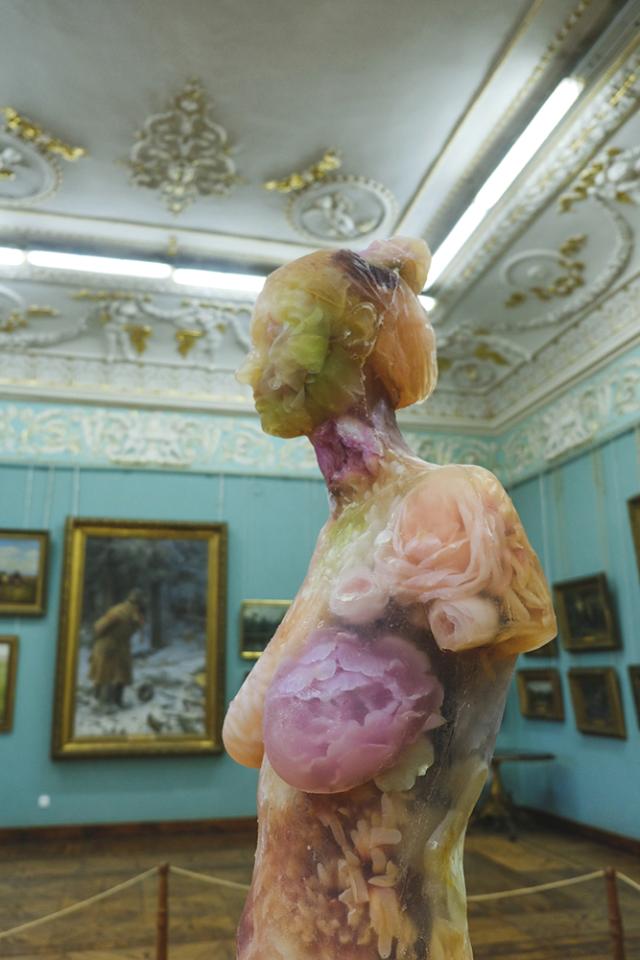 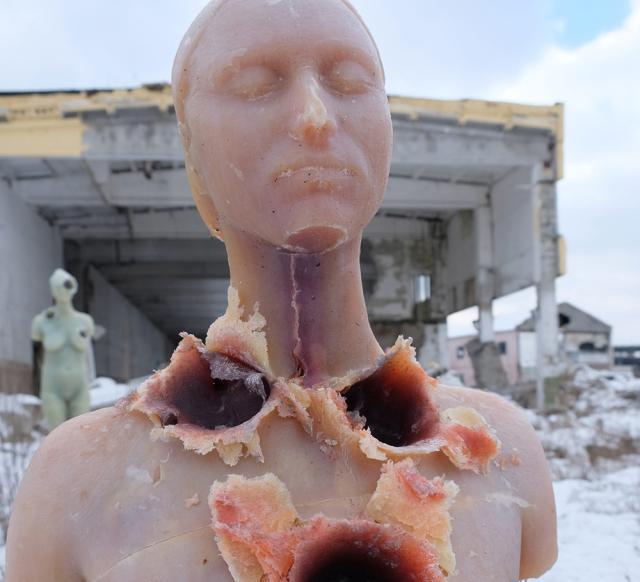 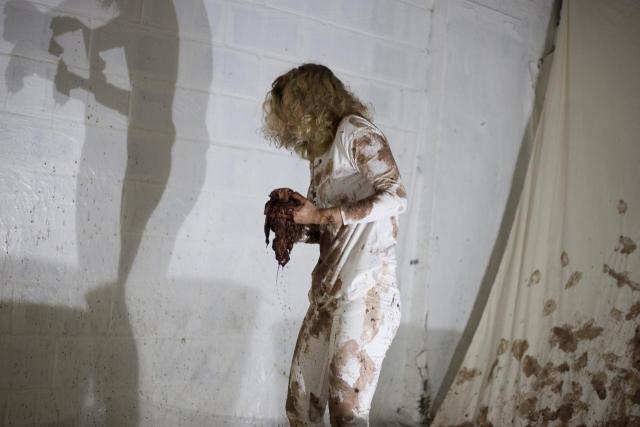 Felicienne Lauro: I am very interested in the role of the artist in times of war (also the topic of my bachelor thesis). As a person and artist that has personally been involved in political conflict, from the Russian occupation of Crimea to the current war in Ukraine, I was curious to know what your thoughts on this are, how has your experience been, how has this conflict influenced your art making?

Maria Kulikovska: I don’t know if art can make something practical, but I think that it can bring up a lot of questions, create a platform where all of us can discuss, where we can heal, it is a place to reflect. Through art it is possible to ask inconvenient questions and wake people up. Artists are not the doctors; we cannot stop the physical bleeding. But the soul can have extreme, even strong pain, and art can be one of those platforms where we can heal our souls.

How did war affect my artwork? Art after the annexation of Crimea by Russia became my own way to survive, not only physically but also psychologically, because after that event I arrived at a point where I didn’t want to live any more. Art is my way to survive, a way to remember that I am existing, it is my way to fight. I think that artists can be seen as soldiers, as weapons to solve conflicts. When the Russian war in Ukraine will finish, art and culture will be the first tool to renovate the country. It is a way to build our identity, freedom and strength without Russian influence.

I do not know how to fight with my hands or how to shoot guns, but I will learn that — to protect myself, so no Russian soldier can rape me and my baby. I believe that until Russia exists as an empire, conflicts will still be present and I will have to learn how to protect myself and my family. But I have already been fighting for eight years on the media and intellectual battlefield, because I can come up with ideas and spread them through visual language — art as a virus. For example the last performance at Neue Nationalgalerie, titles Berlin “254,” affected a lot of people, so this performance and its documentation became a huge media platform that was used to spread the truth, to manifest solidarity with Ukraine, to collect donations for the refugees, to remind politicians to actively work towards saving Ukraine.

Felicienne: You have a possibility to speak for others that have lived and are living your same struggles. Does the artist, in your opinion, as someone who has more tools, have the task to represent those who doe not have the possibility to speak up? If so, how does it feel to have this role?

Maria: I decided for myself that I will act as a feminist, as an artist, architect, performer-actionist, I definitely will try to create my own art as a platform for others that do not have a voice. I would love to know that my art can be a platform form many — women, refugees, queers, for all those who need protection, support, care, love, to be heard. I don’t know if all artists have to be like this, but I prefer to see artists as a political body for real changes. This does not mean that the art they are producing does not have to be beautiful, I am for beauty, but at the same time, if art can be useful, it is wonderful. When art is political and beautiful, then for me it is even more important and even more creative and, I have to say that my art cannot exist apart from political acts, art is about life. But I am not interested in art made without questions, I always ask myself, “Why?”

Felicienne: What role does politics play in your life and in your art? Would you define yourself like an activist?

Maria: The word activist bothers me because I prefer to be called performer/ACTIONIST. The  visual language that I use to describe my ideas is important, because I work in the field of contemporary art. I try to destroy the tradition of art being for the elite only. I do not think that civil activism can be the only useful or successful path, because people shut their eyes any moment they see another demonstration, that is why we must find an intelligent way to make every person wake up, when they see a specific visual message.

Yes, I am very much political.

I founded the School of Political Performance, it is not a political party, but it refers to the Greek school, the agora where people, thinkers, philosophers met to discuss life and politics. By making art we can liberate ourselves: when we are in a public space and doing something with our body that is not regulated by the law it becomes a political body. So, in the School of Political Performance I dream of teaching people to become political bodies.

Felicienne: What role does making art play in your process of refuge and migration? How does it function and is perceived outside of the Ukrainian context?

Maria: I try to answer and visualise these questions through my art. Searching for my place, both metaphorically and physically. My home is my art, there I can be who I am, who I want to be, I can be free.

Now, since 2015 in Crimea, my homeland, which is occupied by Russia, I am a terrorist and blacklisted, shunned as degenerative artist, because did not support annexation and acted against it in my art. I cannot send a letter or greetings in the postcard by post to my own house, because the actual address does not exist any more on the geopolitical map, but it does exist politically. And during the last eight years, any time I brought up a conversation about actual war and occupation forces in Ukraine, most Europeans lost interest. And now, being a refugee for the second time (now in Europe) as a Ukrainian, I am met with a lot of support, but at the same time I still feel a huge misunderstanding, that there is a horror war inside the European continent.

Ukraine was not seen as adapting to join UE, now the European Union has woken up because they know that, after Ukraine, it can be UE in the conflict.

Ukrainian artists are becoming more visible, but still it is not enough, because for many decades Ukrainian culture and language has been systematically eliminated by the Russian empire and European countries looked away.

For example: Malevich was born in Kyiv, but in the books of art history, European, western art history, in the museums it says he was a Russian artist. But the reality and truth is that when the USSR emerged, he defined himself as Ukrainian, who wrote it in his passport, because Soviets forbid Ukrainian language, culture, national identity of Ukraine. And I can continue the list of the great names, which are Ukrainians, but presented as great Russian artists.

This needs to be changed.

Felicienne: Which are your sources of inspiration?  Do you look at other past (or present) artists? Which ones?

Maria: Sometimes I have no energy to continue, but there is something inside me that drives to keep going.

I always get inspired by artists, who are human beings first of all, making art that can help. Joseph Beuys,  for example, through all his life he was healing and making a platform. Another example was Louise Bourgeois, a mom, a woman that helped a lot and that also saved me once when I was in Stockholm, I had lost my documents, didn’t have money or a place to stay, live, continue my journey as refugee, so I planned to commit a suicidal act and before that I went to the museum one last time, where I saw her very simple work with very simple words: ‘I love you.’ This artwork made me break into tears. So, this is the true power of art: this little tiny lady is not alive anymore, but through her art she still sends us messages to heal, to love, to protect. She saved me, she wanted me to keep going. Sometimes art can save many of us. I am very grateful to all the artists that ask themselves, “Why am I doing art?”, because if you can answer this question, you can keep going.

This conversation took place on May 7, 2022 via phone call.

Felicienne Laurois a student at Sapienza University of Rome, attending the course of history of art. Her interest in art has led her to a three month experience at Kunstraum Innsbruck, a contemporary art institution in Innsbruck, Austria, working closely with the curator Dr. Ivana Marjanovic.
Maria Kulikovskais a multimedia artist, architect, actionist-performer, researcher and lecturer. She was born in 1988 in Kerch, Autonomous Republic of Crimea, Ukraine. She lives and works in Kyiv and Stockholm in exile (after Crimea was annexed by the Russian Federation in spring 2014, the artist never went back to her native city).