Volksgarten: From Rejection to Dream Spot 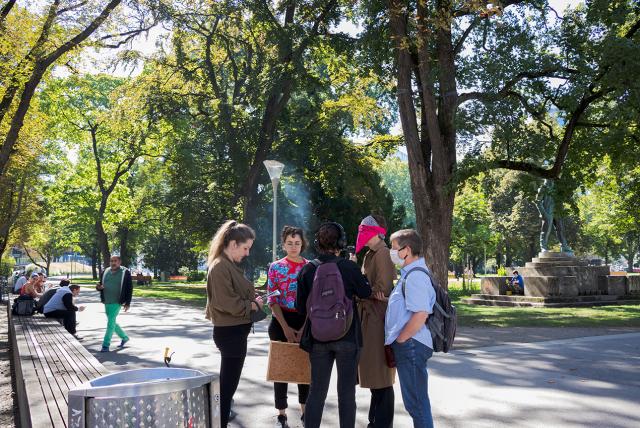 Those who are excluded from existing polities, who belong to no nation-state or other contemporary state formation, may be deemed "unreal" only by those who seek to monopolize the terms of reality. And yet, even after the public sphere has been defined through their exclusion, they act. Judith Butler, Notes towards a performative theory of Assembly, 2015

The Volksgarten in Linz is a transcultural space that, from a hegemonic perspective, is seen as an area of conflict where unemployed, migrants, and refugees are present from spring to autumn, representing a social class that is not heard in society.

With the aim of gaining a better understanding of the space, maiz made an intervention during the summer of 2020, started by interviews and conversations with people in the park. We asked about their opinions, likes, and dislikes of the space to have a glance at what is not evident for the passer-by. This unveiled the intertwined social dynamics that make it a political place.

We proposed the project of revisiting the park through a “blind” and therefore new perspective, in a series of public sound walks (Klangspaziergänge). Guided by members of maiz, it was offered in different languages including German, English, Spanish, and Farsi, within the frame of Klangwolke 2020.

At the beginning of the tour, the participants received a bandana to cover their eyes. Walking by pairs, one person would act as the guide while the other was blindfolded, and then vice-versa.

Starting in Scharitzerstraße in Linz, where maiz is located, the tour began walking towards Volksgarten, walking through areas where it was possible to listen to the contrast, movement, calm, and vivid dynamics that characterize the park. At different points, the tour guide would instruct the participants to “stop”, “close the eyes”, and listen to a question towards a specific attention focus. Through these different stations, the walk deepened for an hour into the multiple rhythms of Volksgarten. It ended in front of the Franz Stelzhamer’s monument, where participants could open their eyes and reflect on a new awareness of the space, in contrast to the connotations of the monuments that are in the public view.

One of the aims of this project was to reframe the visual reference and the idea of the Volksgarten as a “dangerous” or “strange” place, de-constructing the notion of "othering.” This project invites to reconfigure a pre-conceived idea of a known space while deconstructing the notion of “othering” towards the unknown or misunderstood. In this way, a new relation to the surrounding is built, inviting to ingrate “empathy” in our view.

The participants of the sound walks had a positive surprise. Within the exercise, guiding each other was an exercise of trust, facing possible emotions triggered by being blindfolded, feeling lost, or vulnerable.

Listening becomes a political act through the practice of attention. Far from being passive, it brings a point of perspective that locates the self in the world and relation to the surrounding. As described by Salomé Voegelin “... listening, not as a physiological fact but as an act of engaging with the world. It is the engagement with the world rather than in its perception that the world and myself within it are constituted, and it is the sensorial mode of that engagement that determines my constitution and that of the world.” (Voegelin, 2010, p.3)

We captured the experience of this project experience in a Podcast and a short video-documentary by Sara Piñeros and maiz.

Butler, Judith, “Bodies in Alliance and the Politics of the Street” in Notes toward a performative theory of assembly, London: Harvard University Press, 2015,  p. 80-81

Voegelin, Salomé, “Listening” in Listening to Noise and Silence: Towards a Philosophy of Sound Art, New York: The Continuum International Publishing Group, 2010, p.3

Gabriela Gordillois a sound artist and media art researcher, graduated from Visual Communication BA by Centro de Diseño, Cine y Televisión in Mexico City, and Interface Cultures MA by Kunstuniversitat Linz. In her work, she joins political and artistic practices within a social context. She works in the cultural area of maiz.