The Silent University: Alternative Pedagogy as our Commons (english)

What makes "alternative" education "alternative"? There are two basic principles: first, to construct non-hegemonic knowledge in a collective process and second, to create an instituting practice without remaining or never fully becoming an "institution". Education is by default a fully instituting structure in the sense that the institution itself becomes a machine for the sake of sustaining itself.
What, then, does a collective process in education look like? It is the destruction of the hierarchy of the dualist structure between teacher and student as well as between teaching and learning. Furthermore it means: self-teaching, learning by acting together, rejecting the gap between theory and practice, deconstructing concepts of education that are sustained by the institution and turning them upside down, and preserving traditional knowledge of earth and nature.

The methodology, the syllabus, and the content of a topic are the base for pedagogy. But how is it possible to keep the base of this pedagogical structure without falling into the trap of just consuming alternative workshops, institutions and schools, which is getting common in contemporary art and cultural world?

The Silent University (TSU) is an autonomous knowledge exchange platform by and for refugees, asylum seekers and migrants. It is led by a group of lecturers, consultants, and research fellows. A lot of researchers (including myself) got involved with TSU, which was originally initiated by Ahmet Öğüt, an artist of Kurdish origin from Turkey, whose practice focuses on a constant negotiation of institutional practices and frameworks in contemporary art.
TSU aims to challenge the idea of silence as a passive state and explore its powerful potential through performance, writing, and group reflection. These explorations attempt to make apparent the systemic failure and the loss of skills and knowledge experienced through the process of silencing people who are seeking asylum. 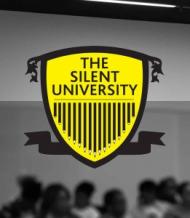 TSU is mainly based on two intertwined structures. The first one deals with the notion of subjectivity among refugees and asylum seekers, which is defined as a "state of exception". The second one creates a new form of alternative pedagogy in which knowledge production foregrounds the co-existence of the refugees themselves and the public.
The whole structure of TSU as a mobile academy is a transversal machine where "citizenship" is experienced beyond clear borders. As a form of translocal borderless knowledge production, TSU rhizomatically handles issues of citizenship, education, institutionalism, borders, war, being a refugee, documents/documenting, urban segregation, commons and others. This transversal practice refers to Felix Guattari, who "sought to make discernible a domain that was neither that of institutional therapy, nor institutional pedagogy, nor of the struggle for social emancipation, but which invoked an analytic method that could traverse these multiple fields (from which came the theme 'transversality')". [2]

The Silent University produces digital spaces using various online platforms and social media in order to disseminate printed works and initiate discussions between researchers and academics with the aim to create a performative archive and to develop transversal research methodologies. Any collective or institution, which wants to initiate a branch of TSU in any city or region can take on this responsibility by following the principles of TSU.
Moreover, TSU uses various self-organized new media tools in order to reach multiple participants, ranging from NGOs to art students and activists. TSU participants create booklets which include their own experiences of being refugees, personal narratives and information of activities of the platform.

Besides its autonomous structure, TSU also tries to create new modalities of social relations and commoning. TSU's activities, such as meetings, events, presentations, and courses all can be seen as a research method for a practice of commoning – of being in common. The meaning of "commons" is not what we own, share or produce in terms of property, ownership, economical means or accumulation, but rather along the lines of what David Harvey refers to as "social relations" that are closely connected to everyday life. [3]

According to political economist Massimo De Angelis, "commons are a means of establishing a new political discourse that builds on and helps to articulate the many existing, often minor, struggles, and recognizes their power to overcome capitalist society." [4] He explains "commons" not merely in terms of the resources that we share, but a way of commoning, the way in which resources are pooled and made available to a group of individuals, who then build or rediscover a sense of community.

Food sociologist and activist Raj Patel focuses on the question of how we define commons. He says, "Commons is about how we manage resources together." [5] His argument is not only about managing and sustaining food growing and sharing but also about how food-related movements should act in solidarity with other movements. "Commons," as understood here, is not a simple concept about collective sharing or ownership. It holds a sensitive position within a defined community and public, especially in contested territories or cities subject to the threat of neoliberal destruction of their built environment. Negotiation and the resolution of conflicting values are key to such commoning practices. Claiming the commons based solely on the idea of the collective use of property would therefore not constitute an example of commoning.

As Stavros Stavrides argues, more than the act or fact of sharing, it is the existence of common grounds for negotiation that is most important. Conceptualizing commons on the basis of the public, however, does not focus on similarities or commonalities but on exploring the very differences between people on a purposefully instituted common ground. We have to establish grounds for negotiation rather than grounds for affirming of what is shared. [6]

Decolonizing Architecture is an art and architecture collective and a residency program based in Beit Sahour, Palestine. In their work, the word Al-Masha refers to "common land" instead of "commons". The collective established a campus in the Fawwar refugee camp (near Hebron in the West Bank) that is another example of alternative pedagogy. They ask, "How to liberate the common from the control of authoritarian regimes, neo-colonialism and consumer societies? How to reactive common uses beyond the interests of public state control?" [7] This question could be asked in the context TSU too, as it is trying to create maneuvers of transcending the nation-state, citizenship, and border policies and therefore relates to commoning practices.

The discussion about ways of commoning is a main part of The Silent University's transversal pedagogy practice, especially under the shadow of recent racist acts against refugees and asylum seekers in European cities. Rethinking the notion of "citizenship" beyond nation-state norms and imagining Europe in borderless ways requires to invent such transversal practices that go beyond solidarity or service practices for and by refugees and asylum seekers and instead reconstruct collective subjectivities against hegemonic representation of knowledge production.

[4] [6] An Architektur: "On the Commons: A Public Interview with Massimo De Angelis and Stavros Stavrides", e-flux Journal 17/2010. Online:

Pelin Tanis a contributor to and fellow at The Silent University. She is Associate Professor at the Faculty of Architecture at Mardin Artuklu University, Turkey.